Posted on September 27, 2011 by Margaret Schlachter

After a night of nerves running extremely high, just ask some of my friends with whom I swapped texts with on Saturday night. I was a ball of nerves, yes I had trained but this was a huge new challenge. When the alarm went off at 5:30am it was time, time to run. Julie one of my co-workers and I carpooled to the race site. As we drove we chatted found a few washed out roads and arrived in the Ascutney parking lot the Vermont 50 was here! Time to see if I could not only go the distance but race the distance!


After we parked we met one of Julie’s friends Amy Lane, who would go on to win the 50K, she is one of the best ultra runners in the North East and member of Team Inov-8. She had opted out of the 50 miler earlier in the week due to a cold and instead was just running the 50K. I was impressed. Not only is she a hell of a runner but SUPER nice! It was a pleasure meeting her and I could quickly see what Julie said about the ultra crowd being tight knit just like the obstacle racing crowd. We also parked near Doug Lewis and his wife Kelly whom I have known through ski racing since I went to there summer dryland camp, Eliteam, when I was a pre-teen. It was great seeing them before the race.

We did some last minute preps. It was nice having Julie with me. I think I would have been overwhelmed by myself. I am not use to being a newb at something and was glad to be ushered through the process. After a pre-race meeting we lined up. As the countdown ended and we were off, Julie started singing, “I think I’ll go for a run outside.” You couldn’t help but relax into the run quickly. She and I quickly broke off as our paces did not match each other.

I settled into a good pace for me, the miles started to melt away. I have a few conversations with people along the way, yes in ultra’s sometimes you have conversations with people along the way. I passed through a couple aid stations, all the volunteers were amazing. Somehow I missed by first drop bag but had overloaded by hydration belt so I was set for a while. A note about the aid stations, these people are awesome! They even helped filled up my water bottles. It was great. The beginning of the race was mostly dirt roads and some trails. 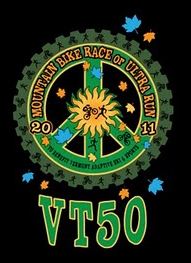 It was about 11 miles in that we met the bikers at the Margaritaville Station, manned by a bunch of Parrotheads, for the Vermont 50 is not only a running race but also a mountain bike race. Actually, it’s four races in one; 50 mile mountain bike, 50 mile run, 50 mile relay, and finally the 50K run. The bikers definitely add a different element to the race as for over half the race you are sharing the same single track trails. I got good at jumping out of the way of a biker barreling down the trails then got my revenge passing them up the climbs.
It was just after the Parrotheads, that myself and 4 other runners took a wrong turn, more like we forgot to turn, instead we headed up an extra hill, losing about 15 minutes, not due to bad marking just not paying close attention. At this point we were about 13 miles in, unfortunately our scenic detour took about 15 minutes and added almost a half mile to the course. It was during this time we joked around about my CW-X Revolution tights, they have become known as my TRON uniform among my close friends and I shared this with the group of guys I was lost with. Lesson one, pay attention!
Once we got back on course this was about the time my left knee started to tighten up. This was a completely new feeling, all knee problems I have had in my life have been in my right side. It was a couple more miles I met Lori. Lori and I ran together for probably about 10 miles. She was amazing to run with! I was so happy to have a running partner for part of the race, and am grateful for her pushing me. I was able to run with her into her longest distance, we cheered when we passed the 26.2 mile mark. She totally helped push me through my demon miles around 25-27. Thank you Lori for being a great partner and loved the chats.
With about 5 miles left she took off to finish her race, my knee was getting tighter and running was becoming unbearable. I was switching at this point between a walk with spurts of jogging. With about three miles left I was solidly into a walk, the downhills I had a rad side shuffle perfected. The pain was building. At this point the race had signs about bring proud and counting down the last couple miles, at this point the only thing I could do was embrace the suck and press on. I had to finish I had come this far.
The last half mile each step hurt to take, I lowered my sunglasses as in my mind this would mask the pain on my face. The last part of the race was all downhill which was the worst on my knee. At this point I did the honey badger backwards walk, yup the honey badger came out! At one point I thought I would be crawling or rolling down the hill to the finish.
In the last quarter of a mile I mustered up the courage to push one last time. As I jogged it throw the finish obviously the pain was showing in my face as everyone said to me you are done! I had never been so happy to finish a race. I have to say the compression in my CW-X tights definitely helped keep me going and pressing to the finish! They put the medal around my neck and I knew I had done it. I was officially an ultra marathoner. 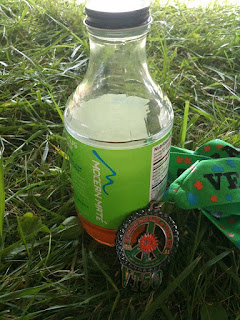 As I waited for Julie to finish, she had her dad run the last 10 miles with her, I realized other than my knee, not only did I feel ok but I had energy and felt pretty good. My hobbling around probably didn’t look it but I had hydrated, refueled and paced (forced pacing) well. My body wasn’t broken, I wasn’t dead, and after it was done the pain in my knee started to subside, a little. I celebrated to myself with a little Mocean Mate and talked with a few of the people I had met along the way.
The official results have not been posted online yet but my official finishing time was 6:47, with my extra mileage we did about 32.5 miles and 5800′ vertical feet climbed and about the same descended. I finished 4th in my age class. It’s funny when it’s all over the painful moments disappear and we are left with wanting to go back and get a new PR. Looks like I will be back in 2012 for the Vermont 50.
Thank you to Mike Silverman and the rest of the staff and volunteers that make this event possible each year. Your hard work was evident at each aid station and marking along the course. See you in 2012.