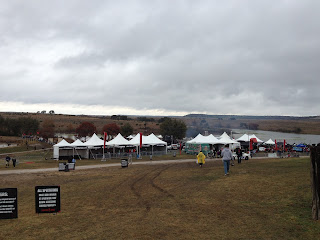 Race day, this race day was like no other I haveexperienced. The Championship Heat was slated to start at 3:30pm. We would be the final heat of the day, the last group to finish out the 2011 Spartan Race Season. As I lay in bed willing myself to sleep a bit longer Saturday morning, I felt relaxed, well rested, and overall content. As I lazily headed down tobreakfast at the hotel, I was welcomed by a sea of competitors, mostly men invarious stages of preparation for their heats. Some already donned with theirbib numbers written on their various body parts, sporting everything frommatching team (cotton) shirts, to the compression wear head to toe. I casuallychatted with some of the competitors, brimming with anticipation for theirfirst Spartan Race.

I calmly sipped my coffee, enjoyed a few bananas andoatmeal. A few of the other Championship Heat competitors were also in ourhotel, some I know from past races and others whom I finally had the chance toget to know. We had watched each other in the videos, now it was great toreally get to know them. We chatted of past races, upcoming races, and ourschedules for next season. 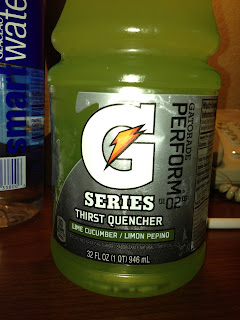 As I pulled up to the race venue, the best way to describe my demeanor was cool as a cucumber. Getting to the venue was super easy, parked the car and made my way through registration. I wasn’t even through registration before spotting familiar faces. For when you race enough evengoing to a race alone you soon find you are never truly alone. Every few feet I ran into more people I know, at times it had the feeling of a college reunion,hugs, small talk, catching up. Carrie sneak attacked me and we hugged and jumped up and down looking like two teenage girls. Yes, we may have even screamed. I caught up with Hobie Call, his wife Irene, and brother Forest. All of who are fantastic people. I spent the day at the venue, catching up with Carrie, wandering the grounds, taking in all the festival had to offer. I was lucky enough to get to meet some of my blog readers, which is always a thrill for me. I also was able to catch a glimpse of a few of the obstacles. My mind however was not on what other people were doing it was on myself. One of my friends remarked you are extremely calm for someone who is about to race for $10,000 dollars. I thought to myself, well I am here it will be time to race when it is time to race for now it’s about chilling out and enjoying to company of those around me. I forgot to mention, the weather. It was raining on and off all day long, after months of draught in Texas apparently we brought the rain!

At about 2:00 the clouds seemed to part and it was as if a window of opportunity had opened for us to race in. I started to prep myself to race, changed into my Spartan Checked gear and prepared to take on the course. A quick interview with the Spartan Race camera crew, then I put the music onand went into prerace mode. For me this is a quiet time. Some listen to loud crazy music, for me its about calming, calming my mind while at the same time warming my body up.

As 3:15 approached I dropped my stuff, stripped down and headed over to the starting line, sized up those around me. Wished the guys all good luck, I was welcomed with so many friendly faces cheering me on as I stood in the shoot, I was taken a back by the overwhelming support from those in the Spartan Race community. I slipped into my zone and as the count down began, Iflipped the switch, go time.