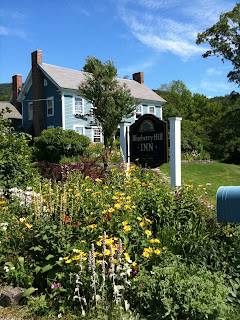 Saturday, July 16th marked the 33rd Annual Moosalamoo Goshen Gallop in Goshen, VT near Brandon and Middlebury. It is tauted as the toughest 10.2K trail run in New England. This marked my first time attending this event and it did not disappoint.

A GOOD CAUSE:
Moosalamoo according to their written brochure is, “a 20,000-acre region of public and private land nestled in the Green Mountain National Forest. Moosalamoo’s diverse ecosystem is home to a large number of plans and animals. The region is also a marvelous recreation area for wildlife viewing, perry picking, hiking, biking, cross-country skiing, snow shoeing, picnicking, and camping.” Blueberry Hill Inn was the host of this race, the owners and the Moosalamoo association’s director, Jenny Nixon Carter did a fantastic job running the race. This was to be my first 10k Trail Running Race and with the super reasonable entry fee of $35 dollars I figured I would give it a shot. 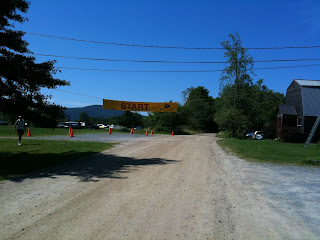 I followed my GPS as I had never been to the Moosalamoo area before, even after living on and off in Vermont since 1997. As I drove up the narrow dirt road up to the Inn for a moment I thought I was lost. I crested up the hill to find the start sign hanging across the road, a sigh of relief came over me as I knew I was in the right place. My friend Jen had emailed me about this race, said it was fun and all the money raised went to conserving the area. I walked into a renovated barn to pick up my race packet, which is the heart of the Blueberry Hill X-Cross Ski Center. Immediately, I felt the warmth of the people around me. The daughter of one of the volunteers handed me my registration pack which included a t-shirt, race number, map of the Moosalamoo area, plate and utensils for the post race BBQ, and a course map. All in a reusable shopping bag. The lodge is super cool and has a huge old wood stove on one wall with stacks of wood around. I am sure after a long ski it is a great comfort in the winter! My friend Jen and her husband Erik showed up and I met up with them. I walked around and looked at all the blueberry bushes on the property and readied myself for the race.

THE RACE:
After spending so much time in the world of obstacle racing, the running crew is much more mellow crowd. This is also a much smaller race then those I am use to, instead of a mass waves of 250 plus people every twenty minutes all day, this race had about 75 participants from the looks of it. However, it drew in people from all over New England. One of the gentlemen I met was a Middlebury College grad who had run the race for the first time in the early 80’s when he was a student at the school and has run it many times since even though he now resides in New York City. As I stepped up to the line to start people were focused, but still jovial wishing each other good luck. At 4:00pm, Jenny Nixon Carter fired the starting gun and we were all off.

The first kilometer of the race was on the dirt road I had just driven up, then we turned onto some of the cross country ski trails and headed up. The trails made my day! The road I am slower on but get me in the woods and I am a happy camper! We then ran through a field of blueberry bushes, where people all around us were picking the delicious fruit. At this point ,we passed the first water station, the kids handing out water in an effort to make it colder added ice to the water. It made it a little hard to drink but I appreciated the effort on the hot day!

The course twisted back into the woods and that’s were we spent the majority of time, half way through the race we circled back around through the Inn, the 5K runners split off. It was a figure eight course. I grabbed a cut of water from the second aid station I and the rest my fellow 10kers plodded along up the next steep hill. It was great the encouragement from the crowd. We darted back into the woods, going up and down hills. It was a great course just enough climb to make it challenging but not too much to scare away the casual runner.

The last couple kilometers was on the dirt road and several of the Inn’s neighbors were sitting on their lawns cheering all the us along the last couple hills. It was a great atmosphere. I finished the race probably somewhere in the middle of the pack. Official results are posted on Cool Running Here. I finished 9th overall for women, twenty some odd seconds behind Jen.

This was about eight – ten minutes or so faster than what I am averaging in training for this distance. Overall, I was happy with my finish. Guess it’s time to run harder in training!

Maybe the best part of the whole event happened after the race was over. The Inn has a pond in the back which is perfect for swimming. I had packed my bathing suit and was psyched to jump in the cool water after a hot run. All the families were surrounding the pond, kids and adults a like were swimming and enjoying a beautiful summer afternoon. The pond cooled me right down and helped my muscles relax after a hard run.

The food for dinner was amazing, I had a huge plate of food, grilled chicken, potato salad, pasta salad with feta and fresh veggies (my favorite), grilled sweet corn on the cob, fresh green salad, chocolate cookie bars, watermelon, and a brownie filled my plate. Everyone milled around picnicking in the grass as a duo played music for us all to enjoy. The topped on the dessert was the blueberry cobbler and ice cream that came out later. It was the best post race meal I have ever had, all cooked and grilled with care.

As we all finished eating, the awards were given out to the top male and female in the 10K. Ironically, the male (Joel Bradley) and female (Elissa Rehm) winner are engaged to each other and are getting married at the farm later this fall. They were both given a hand made wild flower crown, they also each received a night for two to the Blueberry Inn.

OVERALL:
It was a super fun event and I look forward to it next year. Great event for the whole family. A Vermont tradition for many summers to come I am sure. Now I know where those hills are! 2012 34th Annual Moosalamoo Goshen Gallop consider me in! Finally, thank you to everyone who put on the race and the Goshen Fire Department and Brandon Rescue.

You can read another account of the race here: from The Middlebury Trailrunner. Great account and stellar GPS map. So it was 10.6k according to his GPS.