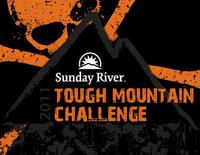 After a heat wave spreading across the country I arrived in Bethel, Maine Friday night in preparation for the Tough Mountain Challenge at Sunday River, ME. I signed up for this event because a few friends whom I had done a race with last fall had signed up so I figured I would give it a go.

I arrived at the lodge to check-in. I have to say the check-in process was flawless. I waited about 2 minutes to get my packet and had tons of time to relax and get ready before my 10:20 heat. This race they assign you your heat time, not the biggest fan of this since I like to be in the first heat and avoid any lines at obstacles. For my entry fee I received a dryfit t-shirt, plastic mug (would have been cooler if it were glass), drink ticket, and my bib (#100). I walked around with my 1 gallon jug of water, doing my best impression of a muscle head, for some last minute hydration and prepped for the race. It was a hot one!

I walked around a little and found my friends Nick and Mike who were running in the 10:40 heat. This race had three options for competitors, Solo, Duos, and Teams. I raced solo as I do all my races. I have nothing against team racing but I like to be able to just go at my own speed, I make friends on the course.

We lined up for our heat around 10:10am. I lined up along with about 75-100 other racers. We received last minute details about the course and when the clock hit 10:20 we were off!

The race itself consisted of many obstacles. I will try to remember and walk you through each one. We started off up the mountain through a series of snowguns, called “Hurricane Alley”. It was already getting pretty warm so they felt great! Next we had a little rock climbing wall to go up and over. I liked the obstacle didn’t like waiting to go up it. Only about 10 people were in front of me in my heat but the person climbing in front of me was pretty slow and I had to wait as a few more people passed. I was ready to push him over the barrier, 1st time being clock blocked (If you have never heard this before read the link, it’s happened to us all). Hopefully next year they will either have the obstacle later or more climbing stations. We than ran about 50 meters up and over a bunch of terrain park features that were pilled together, called “Park, Pipes and Pain.” This was kind of fun as normally you only see them in the winter. We turned back down the mountain and hit the mud. They had made a nice muddy pit to run through with barbed wire at the end. It was super high so you didn’t have to crawl, if it had been barbed wire the whole way would have been much more exciting, this was called “Mud Crawl.”

Then it was back up the mountain up the “Southway Sprint”. It was fairly steep and I was psyched when we reached the first water station. The ski patroler who was handing out water actually was a friend of mine from SOLO Wilderness School. We did our Wilderness EMT Training together. Ryan’s words of encouragement lifted me up the mountain. Thanks Ryan! Loved seeing a friendly race on the course!

After the water came the “Webbed Woods Run.” Ok this one will slow anyone down. Ropes were tied across a steep wooded mountain biking trail that you had to navigate up and over. It actually turned into a rest as you couldn’t run through it. As I caught my breath and headed up the mountain, I was really starting to loosen up and get into the race.

Next was the “Hornet’s Nest”as a ski coach I got a kick out of this obstacle as they had used B-Net and made a tee pee like configuration with tires below you had to run through. Tough to describe well, hopefully someone got a picture I can post!

This next obstacle was well, my favorite after running down some steep rocky terrain you end up in this pit. The obstacle was called, “Trench of Terror” you had to climb out of the pit pulling yourself up on ropes. Super fun. wished their could have been more of this! Coming out of the Trench was my second time in the race I was clock blocked. This time on a narrow piece of trail where a women who was in the 10:00 heat was struggling to get through a rocky section. I felt bad as I had to squeeze by her after about a minute of walking, but I was in it to race and had a goal to meet. I commend her for getting out there and doing it and am sorry to have almost seemingly pushed her out of the way. Their are no friends on race day.

The “Black Hole” was where myself and a group got into a little bit of trouble. The obstacle itself was fine and fun, running up a large culvert in the side of the hill. The trouble started when we all missed the markers which indicated you took a sharp right out of the culvert and charged straight through the next culvert. Oops! We got the the top of what would be a third entrance and found a large spider web covering it. We quickly realized we must not have to go through it. We spotted a orange arrow painted on the ground (the whole course was marked in orange). We followed part of a mountain bike trail up over a inclined wall and around a banked turn. Not knowing where to go next I spotted off in the distance about a 100 yards away a sign for the race. Hopefully next year they can mark off this area better as I found out later, the crew I was running with were not the only ones to make this folly.

I never saw the “Burning Man” obstacle as reported on the website it may have been taken out or somehow we missed it in the woods! Anyways the next thing we encountered was the “Lost Tango” a heavily wooded section of trail between some of the ski trails. I was in my element. I think I passed about 5 or 6 people here. I love running down trails. It is one of my favorite activities living on a mountain myself.

We had another culvert to go through after running down the rocky stream bed. This one had a tarp at the end of it to make the whole tunnel seem darker. Hardest part was getting out of the tarp. Good obstacle. “Barker’s Pond Deadliest Catch” was probably one of the most unique obstacles I have seen to date at a race. I had to pull a picture off the website. This was much harder than it looks. Basically it is a suspended net above a pond. The net is there for the winter months if patrols of the ski area have a hard time sitting on a moving chair. The net will catch them before they join the Polar Bear Club. The net bounced up and down as we were running down it, hard to find a hold and harder to keep a constant pace, loads of fun!

Directly after coming out of that was another wall to cross over with a muddy pit on the other side, then came the final climb of the race. This one wasn’t long but it was fairly steep and made for a good last push! As we were running down hill we had two obstacles remaining. The first was called “Skull Candy” named after the terrain park feature we had to go up and over.

Finally came the slip and slide, I ended up running down it as the slide was covered in rocks. It wasn’t that slippery so I made quick work getting down it and the mud pit at the bottom and sprinted into the finish. For the record they had greased the slide with some sort of cooking oil so the mud at the bottom was a mix of muddy water and cooking oil, I smelled like a french fry all night long even after a solid shower. 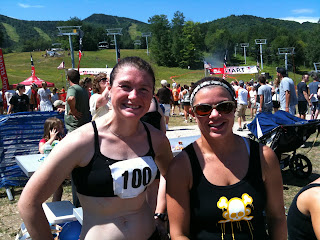 Unfortunately, I was not able to stay much past my heat as I had a wedding to get to that evening a couple states over, actually 5 hours away. The atmosphere was great, people were mulling around before and after their heats discussing the race. They had a great band playing all day long. I did get to meet one of the blogs readers which I have to say was probably a highlight of the day. Alysha, it was awesome meeting you and look forward to seeing you at a race soon. Looks like it will be the Renegade Playground Challenge in October sorry you won’t be able to make it to the Spartan Beast! Thanks to Sunday River for putting on a great event, fun event for the whole family. I am only sorry I missed the kids race, would have been a blast to watch.

I accomplished one goal, beating the boys, sorry Nick and Mike. I had you in my sights after the Shawnee Peak Challenge. Although, I did not accomplish my personal goal of the race in under 40 minutes. Looks like I will be headed back to the Tough Mountain Challenge next year, this time with a better sense of direction. I have a bone to pick with you Tough Mountain Challenge 2012 watch out, I want one of those belt buckles!