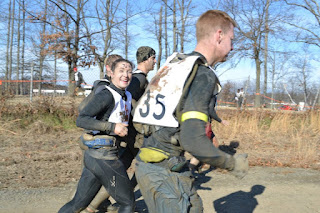 Cold and wet, much colder and wetter than I thought this race would be we soldiered on to the next obstacle about half way through the course we hit Shake and Bake. This obstacle was much like the barbed wire, as it was another barbed wire section. This one however you jumped into some weird muddy water then had to crawl or roll through the barbed wire section, however peet moss had been layer down. The funny part was as we went through this for the first time a sense of warmth came over us all. I believe it was Katy who stated it was the warmest she had been on course. We quickly rolled through and came out covered. I put my blanket back on me and continued on. 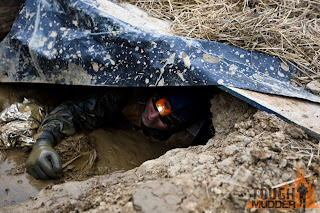 Next we went up and under more logs, at which point the guys kept yelling watch out some aren’t nailed down. Each time afterwards in a funny way we all told each other watch out some aren’t nailed down. I don’t know what was so funny about it but it raised our cold spirits. through more mud we went and continued on. We met twinkle toes, the balance beam obstacle over you guessed it, more muddy water. Yes basically every obstacle required you to get wet and muddy a common theme. As I shimmied across the obstacle Todd made it his bitch and walked across like nothing. I didn’t want to risk getting wet again and took the safe route. The next aid station was right after the obstacle more chicken broth and sharkies and a banana. As I was moving on I heard my name called. Jenne Groves a fan called out for me, I am sorry we weren’t able to really meet but we had to go on. Thanks to her and all the volunteers for all the help!! We couldn’t have done it without you all. 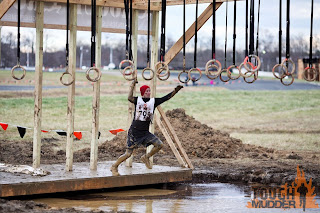 As we approached Trench Warfare, literally underground mud tunnels that bent and you had to crawl through I saw Mario, one of the guys who had done the overnight hike with me here in VT. He advised the best tunnel to go through. I crawled in and thanked him as I exited on the other side. It was so comforting to see so many friendly faces. Between those racing, those volunteering and those spectating I felt like I knew everyone.

The next obstacle was nearly impossible hanging rings over another muddy pit. I tried this one but with my hands fully entrenched in mud I didn’t get further than two rings and fell. Todd did the same. We both ended up in the penalty box for 5 minutes. I was so happy for my blanket as I stood in the cold and windy field waiting for my time to be done. Katy and Josh took more time attempting this obstacle so by the time they got to the penalty box we were released. It was too cold to wait and Todd and I were off on our own. 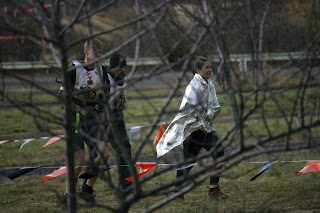 The next obstacle called “The Factory” was a mix of gym class and an waterside park. You had to climb up this rope ladder, when you got to the top you slid down this vertical slid into a muddy pit of water. It literally shot you into the water. Todd assisted me up the ladder and reminded me again, he is going to teach me how to climb a ladder! I was thrust into more cold muddy water and got up and continued on.

Rubbernecking was next. YES! I finally get to just carry stuff. This I can do. I picked up the two tires tired together and proceeded to carry them around the 1/4 mile of track. I do love carrying stuff and commented to more than one guy as I passed them this very thing. After dropping them off we went through “Tired Yet” which were a field of tires to navigate through. Nothing too hard about this part of the race, we ran a little bit more scaled over some more Berlin Walls these were about 10 feet high and over some large hay bale piles. Much like Vermont they had a hurdles about 4 feet high sort of section but this time they were constructed of wood. Todd again showing his height just had to walk over them as I thrust my body over each one. 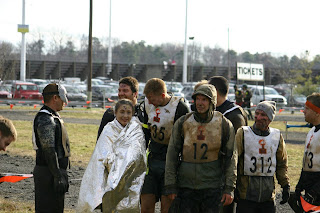 The lamest obstacle, the meat locker was next, a cargo container with hanging tires, although it was harder once the sun when done. Another section of low crawling came next. This one, the “electric eel” was like a barbed wire crawl except instead of barbed wire it was electrified wire and you were on a slip and slide type mat which water on it. More like shock and awe. Todd and I took the five minute penalty the first time around. We were wet and cold well really wet and cold. After the penalty we got to the next aid station more broth and Sharkies. 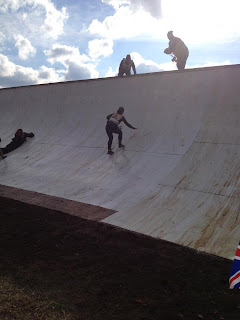 As we walked to the next obstacle Everest, a skateboard quarter pipe thats been greased, Junyong our friend and the male leader caught up to us on his second lap. he advised me not to take the time on Everest and just take the time penalty. It wasn’t worth the energy expenditure he said and was justing his penalty time to refuel. Smart man, and he would go on to win the race. I tried and failed Everest and joined Junyong. His penalty was up before me and he was off.

I set off for the obstacle called the Massive Turd. Todd waiting his penalty out. Well really the pictures can only really tell this one. It was a mix of a lot of different things which all lead up to one of my favorite obstacles. You were on a cargo net crawling across over two stories in the air. Fun times! 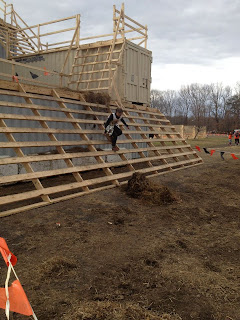 Next came the water, yes the water. It was reported the water temps were around 36 degrees. When I got to the wetsuit tent, this was when I caught up with Yitzy. He was just getting his wetsuit on. I pulled my wetsuit on over my wet muddy clothing, there was really no other way to do it at that point. As soon as the wetsuit was on I went from cold and miserable to SO HAPPY. My wetsuit was my new best friend!!