Posted on September 19, 2011 by Margaret Schlachter 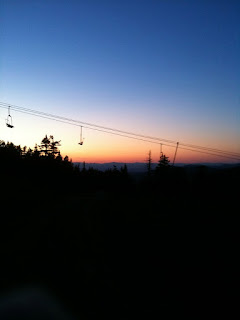 I have written about this before but really since I left for NH and Irene hit my hometown my training like parts of this area has been in disarray. First it was the lack of being home, then not having roads and trails open around me. Tonight I decided to do something I haven’t done in about a month, a sunset hike up Killington. In truth its been weeks since I have summited the mountain, a mountain which I made the trek up several times a week for most of the summer.


I set off with my co-worker Ben as when I do hikes that most of it will be in the dark a buddy is an important factor. Ben and I set off around 6:30pm and reached the top just under an hour later. I have to say, I LOVE being at the top of Killington around sunset, we were about 10 minutes late to hit is perfectly but it was still beautiful. It reminds me how lucky I am to live with a mountain in my backyard.


My favorite part however is the silence, you don’t get this silence during the day. I covet silence in a world with so much noise between, phones, computers, cars, and everyday life we forget what silence sounds like. It takes me going to the top of a mountain shut off from the world to remember just what silence sounds like. It takes only a moment, that moment between breaths, for me at the top to remember the sound and carry it with me back into my life filled with noise. 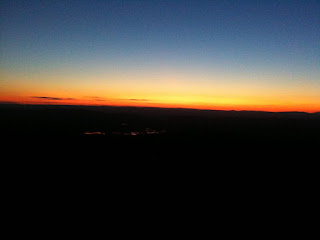 As we headed down, headlamps on, we saw some of the damage Irene had caused. One of the trails is blocked by two huge trees we crawled around, otherwise damage was minimal on the top of the mountain. As we made our way down we talked about bear stories, thankfully we saw none on this trip. As it grew darker the stars came out we took a second by the stash to take in the stars then proceeded down the rest of the work road to the base area.


It was a nice reminder of what is in my backyard and I have at my disposal year round. It definitely is Fall and we felt the temps drop as the sun disappeared. In another week or so we will be in peak foliage then it will all be over and winter will be quickly on it’s way.


The hike rounded out at just under two hours and we covered probably about 7 miles. I accidentally turned my GPS off in the first few minutes of our descent. So I am going by memory of all the hours put in on these trails over the last three months.