Posted on September 28, 2011 by Margaret Schlachter 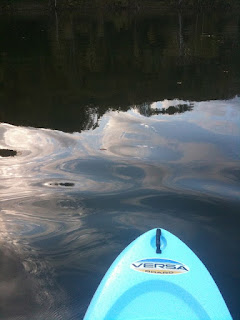 Another day of recovery and letting my IT Band untangle itself. However, we took it up a notch today and I graduated from the foam roller to another tool which has not hit the markets yet but I can tell you it was one of the most painful and best experiences to loosen my IT band. Basically, its like rolling on a lacrosse ball on steroids. Other than rolling out my body I did actually go and be a little active.


Truly only a little, I followed my training partner around Woodard Reservoir. A place we have been many times over the summer. It was the first time either of us had been out on the lake since the Hurricane. The roads are still a little mangled getting there but it was worth it! It was nice to just be quiet and calm for the hour and a half out on the lake. During this time I had a breakthrough moment of the last few weeks. As I slowly paddled behind Jason, I realized, I am ready to train again.


It’s been a tough couple of weeks in the motivation department, between overtraining, Hurricane Irene, being displaced, work picking up again, physically beat up after the GORUCK (shoulders), and a bundle of nerves going into the Vermont 50. I feel like I am finally ready to get back on track and get ready for the upcoming Zombie Race in Maryland and ultimately finish out this season with the World’s Toughest Mudder. 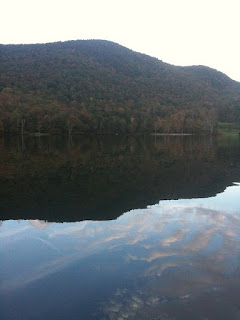 It may not sound like a huge change as I have been training, but in the past few weeks it’s been hard to find the motivation and keep myself on a forward path. All of a sudden while on the water today, I felt it the urge to train again. I will be easing back into it with the IT Band. Look for some changes coming up as I still have two months until the World’s Toughest Mudder and want to make sure I am peaking at the right time. But it’s now back on again, two months will go fast and I have a lot of prep work to do before the WTM!


I have to close out this blog with a link from a reader Jeff Cain, he writes a great blog called, On My Way to Sparta, he wrote this post about his daughter and it’s just wonderful. She is truly a little Spartan in the making!!