Posted on October 11, 2011 by Margaret Schlachter 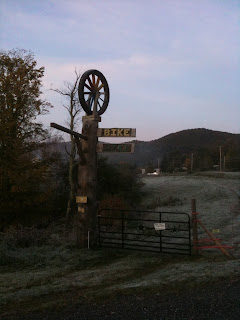 A note about his post, it along with Friday’s was written at around 3:30am going into Saturday morning. In an effort to stay awake while crewing for Andy I decided to write. This is what comes out of my brain after almost 24 hours of being awake…

After a somewhat sleepless night I woke up in the Amee Farmbarn, Jason and I packed up the car in preparation to head south. As we emergedfrom the barn early in the morning we encountered the first hard frost of theFall, a true sign that winter is creeping ever closer. In fact, this frostforced me to pull out the scrapper for the season.

After a quick stop at the Pittsfield General Store we beganan epic day of travel en route to Lake Anna State Park in Virginia for AndyWeinberg’s Triple Ironman and Jason Jaksetic’s Double Ironman. The sun rose as we leftthe Green Mountains and we headed south of the Mason-Dickson line. As we progressively moved further and further south we watched the thermostat on thecar climb higher and higher. 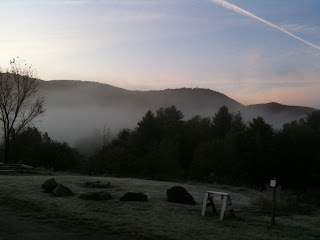 Over the next twelve hours we listened to a lot of music,shared many stories, and went over the race plans about a hundred times. Six states, one district, and some backroads later we arrived at our destination,unpacked Jason’s and Andy’s bikes, which we had transported for him down from Vermont. There is nothing like a 12 hour road trip with a friend to strengthen a relationship.

We set up the tent and headed to bed for the night. Thusbegan the journey of the Double and Triple Tri.