Posted on October 14, 2011 by Margaret Schlachter

After a blissful nights sleep, well in truth I don’t remember sleeping, but I was told I was out like a light. The last thing I remember of Sunday night was the TV on and something playing on it then it was morning. I was told that I was snoring immediately, well I was that tired after spending days awake and running in fact the most I had ever done.


After a quick breakfast and gas up, Jason and I made the long trek back north. Most of the ride was uneventful as both of us were tired and doing whatever we could to keep each other on an even keel for the 11 hours we would spend in the car.


Along the way somewhere in PA we stopped at a shopping center, village thing. Now, I know I have lived in Vermont for a while now and we do not have a lot of shopping centers but something about this place gave me the creeps, maybe it was my exhaustion or distaste of suburban sprawl. It was as if the developers wanted to create the illusion of a town, sidewalks, street lights, yet all there was in this village off a major roadway were chain stores and chain restaurants. We stopped at Chipolte and I can’t put my finger on it but something about it just seemed fake. Maybe it was after spending the weekend watching something so real and gritty this perfectly manicured idea of a village made me uneasy. All I wanted to do was eat and get the hell out of there. I wanted to yell out and tell them all that I had just witnessed. As they strolled by lovers hand-in-hand, mothers shopping with their daughters, living the suburban ideal I just squirmed in my seat. It all just felt contrived and fake. I did however enjoy my burrito that I ate with a vigor as if it were the last burrito on the plant. 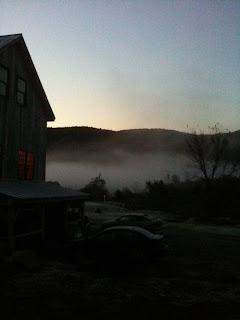 We got back in the car and continued our journey North. As we crossed into Vermont a wave of relaxation came over both of us as we knew we were almost home. It’s funny the air even seemed to change when we crossed the boarder. It was somehow cleaner and crisper. I opened the sunroof and we took it all in. Jason took his the first picture of the trip ironically of the green mountains of Vermont. After the whole weekend the only picture he took was of the same views we see each day. We arrived back at Amee Farm just after dark, no large fan fair, no big party, just Matt in the Barn and it was exactly the way it was suppose to be. The epic adventure of the weekend was over just the way it had started in the dark, we quietly slipped back into the landscape of the Green Mountains and it was as if we never left.