Posted on October 14, 2011 by Margaret Schlachter 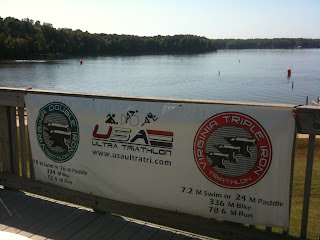 The Double Iron is over, the Triple Iron is over and I am left tired, worn out, and even though I didn’t race I feel as if I was part of something special over the weekend. In truth this weekend was a chance for me to remove myself from my everyday life as much as it was for the racers to do something physically and mentally extraordinary. I feel privileged to be part of such an amazing experience for these two and the many others I met and was able to lend or was lent a hand along the way.

Many people will read the past few days of my blogs and think, “this is crazy” or “why do something like this” or “these people have lost it.” In a lot of ways I share the same emotions as I did after volunteering at the Death Race this past year. I truly feel that you cannot appreciate all that are these races until you are there watching it all unfold before your eyes. YouTube videos are great, pictures are great but they only tell part of the story. My aim of this post is to give you all a better understanding of what transpired over those hours I spent in Virginia. More importantly I want to highlight the unsung heros of these races, the crew. 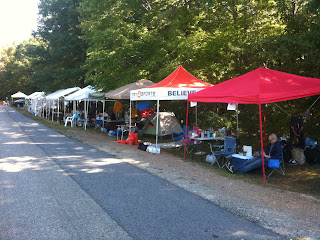 The support crew for any racer really is as much part of the race as the racers are. They are the ones who are behind the scenes making sure everything is perfect for their racers. Some are family members, some are friends, other training partners, some are simply hired for the weekend in the case of many of the international racers. Each comes with their own story and faithfully stands in the background as they dutifully help their athletes cross the finish line. This is my story and a little bit about the people I met along the way.


As you all know we arrived Thursday night, to a silent stretch of road with pop-up tents scattered about. A few people were milling about the tents I would later dub “tent city” or “tent alley.” It was calm and quiet a few racers’ support crews were up still drinking a tea or other beverage as their racers slept. Friday morning, it was time for the race the few Triple Iron (about 12) competitors gathered, along with their faithful crews, many/mostly family members, one of the competitors from Germany played our (US) national anthem on his trumpet, a moment of silence was observed then the racers were in the water and off.

Most crews retreated to their tents and consumed breakfast as the racers swam. Some of the athletes support crew watched faithfully from the shore and others even stood in the water themselves for hours fueling the racers as they passed during their 18 laps it would be 12 for the Double Irons. As the racers came out of the water there too again were the support crews to take their wetsuits, give worlds of encouragement or to at least try to get the competitors to eat something. Jason and I went to get some more food for the day and to stock up on the things I had forgotten to pack. 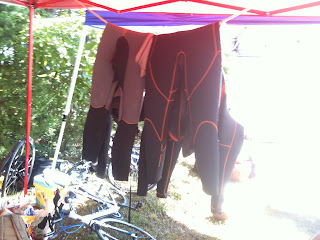 This was the first time that I was crewing for a race and I was definitely a newb as I looked around at some of the other tents spreads. I quickly did what anyone else would in my position stayed cool and faked it. Over the next couple of days I took my ques from those around me. All I knew was I had one singular goal, get Jason and Andy to cross the finish line without injury and keep them going by all means along the way. I watched as one of the hired support crews would hold out an array of bars, gels and drinks as her racer raced by lap after lap. It took them a couple hours to get into a groove. I watched as one of the tents next to us the racer had found her crew on an online racing forum after she had her original crew back out. I watched him learn on the fly as well. On my other side was the wife, father and two friends of one of the racers who happened to share my last name, Schlachter is not all that common! 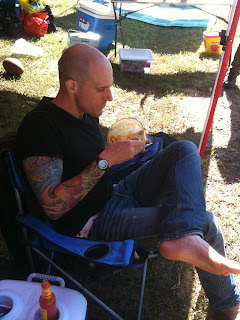 We all in our own way were learning as we went. During the bike portion of the race many of us crewing got closer and I found myself helping many more athletes than just Jason and Andy. I think we gave Frank Fumich about a whole pizza along the way. I helped out Kay our neighbor with her 8 Raisinettes and 8 Pringles a couple time. We all offered words of encouragement to all the athletes as they turned the cone hundreds of times it seemed like. (The bike course was a 2.5 miles out and 2.5 back loop and the run was a mile out and back loop.) I ran back and forth each lap of Jason’s as he dropped a water bottle and picked up his next one, putting in several miles on the same stretch of pavement in tent city. We, the support crews, also helped get each other through the dark hours of the night when not only did the night seem to drag on for hours but also moral for all started to dip. It was cold, it was late, and here we were sitting waiting for our athletes to come around again and again throwing our own feelings aside to give the athletes the smile or high five they needed to push them through that next lap. We learned to rely on each other, borrowing tools, giving extra supplies. I got a well needed Coke and Mountain Dew for Jason from another race crew along the way, and still am thankful for the kind gesture. 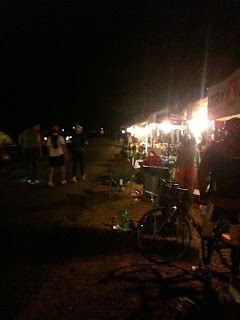 By sunrise on Saturday tent city was in full swing, the smell of bacon and coffee on Coleman grills filled the air, eggs were made for both the racers and the crew. As the sun came up, the zombie like crews from just a couple hours ago perked up and pressed into the next day. Some had slept for an hour or two, others like me who were solo pressed forward fueling themselves with some strong camp coffee. Many of us searched for outlets to charge electronic devices to keep those at home updated on exactly what was happening in this small park in Virginia.


Along the way I got to know a little bit more about some of these support crew members, other than the wife, husband, father, mother, many of the crew members are no couch potatoes. I met Ironman competitors, outrigger canoe racers, adventure racers, marathoners, ultra runners, basically a rad group of people who at a normal cocktail party would have THE stand out story. Here we were just part of the fold, part of the scenery of the race. For we were not the ones racing, not the ones in the spotlight only the supporting cast in this movie. We were all dedicated to the athletes and the athletes alone. 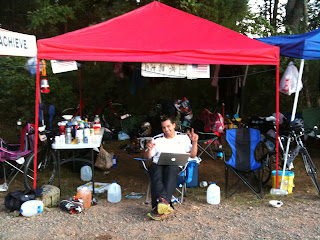 As the athletes transitioned from the bike to the run many of the support crew after little to no sleep not only crewed but also became pacers for their athletes. Their was no, “you don’t understand” as many crew members had been up as long is not longer than their athletes. For when an athlete decided to take a nap the crew made sure the “nap” didn’t turn into a multi-hour affair. For me, I held up blankets to shade Jason as he changed in his transitions, watched Andy add more butt cream than I thought a person could use to ward off chaffing from the bike. You become very intimate with these people quickly as you monitor their fluid and nutrition intake and expulsion. You watch them go through the highs and the lows in racing such a long race. On the night Andy biked I spent the whole time telling him I would take away his bike seat if he stopped. Yes, I channeled from Joe Desena that night! 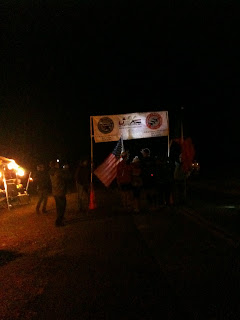 When the run came I turned from purely support crew into a pacer. I ran the first 10 miles with Jason then took a break then finished off the last marathon and a little bit more with him. I take jobs I am given seriously and when Jason asked me to crew for him, I said I would but under one condition, he had to finish and I would do everything in my power to help him across the finish line as his crew.


This would be more true than I could have imagined when we were in it. As we ran lap after lap, thankfully Jay Jay helped us Sunday morning, I ran ahead and got her to ready bottles and food for Jason on our laps around she was a saint and came up huge. I ran/walked right at Jason’s side, much of the time no words were spoken, we had spent the last couple of months training together and we both knew what each other needed on race day. I kept saying, “I am here and not going anywhere” and “we are going to finish this together”. I also forced fluids into his body when the last thing he wanted to do was drink. I was ready for him to blow up at me at any moment and mentally focused in on just the task at hand, forgetting about my own hip pain, and the fact I was running the most miles I had ever done in one day. Really all these things didn’t matter it was getting Jason to that finish line that fueled me. This is the part of crewing that not many talk about, as you literally watch a person in pain and continue to just push them further, at the same time you are the decision maker if things go really wrong. Thankfully, I did not have to make that decision. I did however see some dark moments, and truly at times saw myself in the way Jason’s body was reacting. It was at times as I was watching myself when I am “in it.” 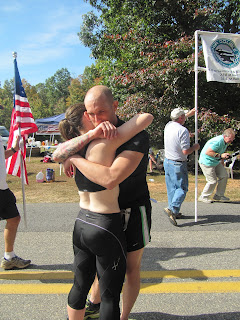 As we reached the last lap and we knew the race was over, the last couple hundred yards I teared up, it may have been the 60 plus hours I had been awake, but really I felt the gravity of what this meant for Jason and after the photos were taken there we stood hugging knowing what it had taken to get him here to this finish line. I knew I had done it, my goal had been accomplished both my racers finished, Andy set a new swim record, Jason finished 5th in the Double and was the 3rd American.


In the end I may be “crazier” than the athletes for opting to spend my weekend not sleeping, and catering to two other athletes. I truly feel like I went on my own journey as much as the athletes did. I feel changed after the experience and feel I was privileged to be part of something that 99% of the population will never understand or experience. This post was verbose yes, however capturing the moments onto the laptop was truly difficult. I only hope I was able to do some justice to what these racers and support crew went through over the weekend. This post may just sound like the ramblings of a crazy person if you got to this point in the post thanks for reading it to the end. There was so much I feel I left out but somethings are left on the race course and it’s meant to be that way.