Posted on October 18, 2011 by Margaret Schlachter 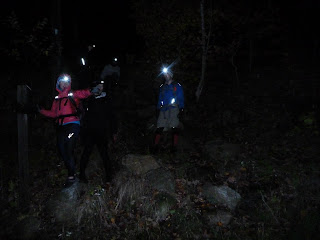 Why not’s have flooded my life recently. In fact my Death Race essay’s theme is why not. Things that months ago seemed silly, crazy, and sometimes reckless and possibly dangerous are now becoming norms. That is the thing about shifting norms they move at such a slow speed before the conscious notices the change it has already planted itself into the subconscious and the new reality has taken over, the norms are adjusted and the mind and body moves into it’s next stage. Things that once were crazy seem mundane, we look to up the ante and get the next fix much like a junkie, only our fixes are adventure. The highs become higher and the lows are much harder to pull ourselves out of as each adventure stacks on the next. 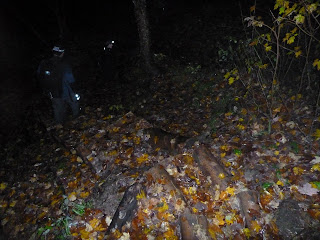 This weekend myself and six other like minded souls set out on a trek, a trek through the woods of Vermont on a cold night in October. Why many have asked did we decide to hike over 20 miles at night on the Long Trail. The answer to me was always simple, because we can. The hike was set up under the guise of night training. I called up a group of people with similar interests with one real goal, go out, hike for hours in the cold on an unfamiliar trail, bring the right clothes, right food, and right attitude to survive the elements. For me it was another test of the why nots, the because I cans.


Sound extreme, not really in truth it was all about the preparation. In truth, I had mapped out the route before the hike, I had a guide book with me at all times. I had prepped for the distance, I had the gear, the food and the hydration. The group was vetted before we took off to make sure they could really do this because once we were in the woods there was no dignified exit at mile 3, no Starbucks around the corner, we were in it together until the end. The real challenge was the one within, the one the mind plays at 4am when you the sun can’t come up soon enough and the dark of the night has engulfed you for hours. This is the real challenge of the night. 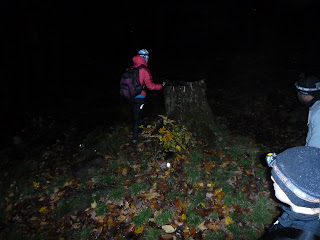 Seven of us set out to hike from Brandon Gap off of 73 to Route 4 in Killington on Saturday night. Each had their own motivation for being in that moment. As we set off down the trail, my headlamp alternating between the ground and the ever elusive white blazes we moved forward, at times jokes flew, races were discussed and moments of one-upmanship in story telling emerged. At other times, we silently trudged along down the trail covered in leaves just trying to make sure we didn’t trip over the next hidden rock on the trail. Everyone had moments of realization, it’s an amazing thing how the darkness of night brings out vulnerabilities in a person, it sees the small crack in the armor and tries to pry them open, especially in the witching hours of 3:30-sunrise. Some trudge along in silence while the battle rages on in their minds, other are more vocal or physically these cracks are exposed and the realization sets in they need the help of the others around them. Some see things on the trail which were never really there, others question why this was a good idea. My main concern was always get in and out of the woods safely and stay on the trail. 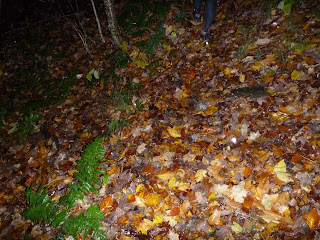 Through the darkness emerges something else instant camaraderie, new friendships, everlasting bonds, a unique moment in time, it brings jokes, muddy feet, cold hands, and just when you think the darkness will last for the rest of your life, suddenly everything around you is getting brighter, the sun starts to peak it’s head up from the mountains, finally you see where you have been all night long the vast beauty that surrounds you. Your second wind hits and the next thing you know you are back on the road, just a few miles from home and a quick car ride away. The adventure for now is over, left are the memories and the bonds scattered over the last 22 miles of trail. About 11.5 hours after it all began you are back where you started with an experience hard to describe, not because it was profound, but because it was a moment in time, a moment you feel and that feeling is singular to you and you alone. 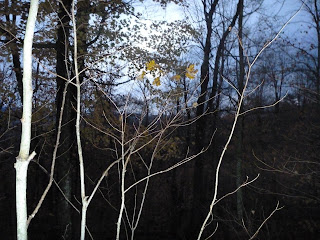 I could have used this post to go into all the details of the hike for it really was a fun night with great people. Everyone was amazing but we each truly had our own motivations to be in that place at that time and that’s what makes it interesting the motivation to step out of the grind, off the hamster wheel and experience something real, something gritty, raw and remind us that we are creatures of survival, and a little test every now and again of our mental fortitude keeps us honest. We all took something from that section of the Long Trail and at the same time left something else out in the woods on the downed leaves, in the streams, and out in the cold freezing air of Vermont on a windy October night.