Posted on November 9, 2011 by Margaret Schlachter 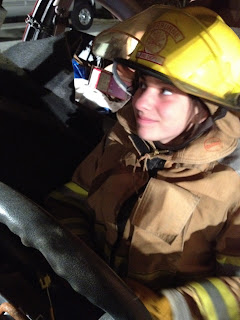 Well somedays I get a workout in and others it just doesn’t happen. Today was a day it just didn’t happen after 9:00pm I finished my last meeting of the day and headed home. It’s Tuesday which is drill night at the fire department here in Killington. So instead of a workout we got to cut a car apart tonight, and that’s pretty rad in and of itself.

I had forgotten what we were going to do tonight until I got to drill. I quickly put on my turnout gear and we headed out to the car. One of the other women, Sasha got to be one of the victims and the other was our in house dummy, no really its an extremely heavy life-size dummy. 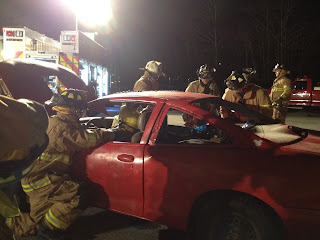 We headed out to the car and got to practice with all sorts of tools. We took the dummy and Sasha out of the vehicle several times. As well got to practice with the extraction tools. Let me say they are heavier then they look and using them with full turnout gear makes it a little harder. After getting to play with some pretty rad tools we ended the night with me buddy carrying our dummy somewhere between 150+ pounds up the stairs back to it’s chair. A fun night at the department. 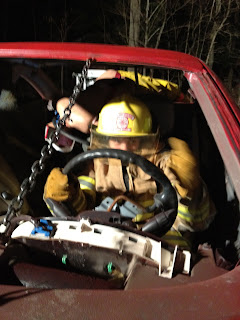 Tomorrow I am back working with Steve at Green Mountain Rock Climbing.