Posted on December 7, 2011 by Margaret Schlachter 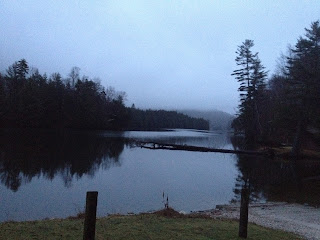 It’s December, it’s Vermont and what did I decide to do today, tryout my new wetsuit. Yes, I broke down and got a wetsuit. I had actually wanted one for months but couldn’t give myself a good excuse, until World’s Toughest Mudder. So now I am the owner of a very nice Tri-wetsuit by XTERRA. I had not planned on getting such a nice wetsuit for this race, but the opportunity came up to get it at a rate that was impossible to say no to. It was if the godfather himself was saying, “I’ll make you an offer you can’t refuse.”


There was the wetsuit waiting for me when I got back from Texas. So I thought since we are having unseasonably warm weather in Vermont why not take it out for a swim. I hustled out of work to catch the last fleeting hours of sunlight at my favorite summer swimming spot, Woodard Reservoir. I was there alone as the misty ran came down on a day where the temps were about 46 degrees. I got changed in the parking area, it really didn’t feel cold at all just standing around in a bathing suit. This wasn’t going to be that bad. As it happened, as I was prepping to go for a swim so was my training partner, half way around the world, although his swim in Hawaii would prove to be much more enjoyable than mine. 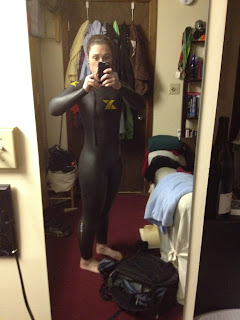 With my wetsuit on I walked confidently to the edge and plunged myself in. HOLY BALLZ it was cold. In fact the water here is in the high 30’s at the moment. My body in the suit felt great but my exposed hands and feet were another story. Many people had complained the water in Texas over the weekend had been cold, it felt like a jacuzzi compared to this. I swam out for a few minutes, within the first thirty seconds my feet went numb, hands were a bit tougher and lasted longer. After I had swam not too far out I turned back to err on the safe side. My core still felt great. The new suit felt good. My feet well I couldn’t feel anything.


I came out of the water after about five to ten minutes, core still feeling good. As I swam back to shore stepped back onto the gravel, my feet didn’t feel the rocks, they were frozen, but not frostbitten. It was a strange sensation. But my time in the water was not over. I went back in just for a test and went up to about shoulder high water and just stood for about a minute. Then my cold water training was over for the day.


All the ice baths in the world don’t get you ready for the frigid temps of swimming in the winter in Vermont. Looks like this one will be on repeat over the next two weeks leading up to NJ for if I can swim in Vermont in the winter. I can swim in NJ in the winter. Good news is the wetsuit fits and is comfortable to swim in, and in a strange way after the fact it was kind of fun, during thats a whole other story. I think Jason’s swim in Hawaii was still probably more enjoyable but mine even with it so short was more eventful.