Posted on December 9, 2011 by Margaret Schlachter 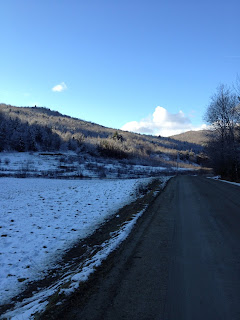 Somedays I feel it in me, I need to run. I need to be active. It’s a craving I get deep inside of me, a lot like sometimes I need to eat pizza. When I want it and need it I know it. Even still a little sore and tired still from this past weekend, I knew today I needed something. As our days are incredibly short here in Vermont getting out and active while it is light is really a luxury. After three days of twelve hour plus workdays, I needed to get out for a little. So after lunch today I did just that. I left for a run.

We had about 5 inches of snow last night so I decided to stick to roads. I ran the same loop I ran over a month ago. highlighted by dirt roads and miles of ascent at the end to get home. Nothing was particularly special about this run, I just went out and did it. It wasn’t until I had run about a 10K that I realized I have gotten faster over the last couple of months. I looked down at my watch and I had done a training run 10 minutes faster than I had raced a 10K in July. The thing was this wasn’t a race pace for me, it was just a run to stretch out the legs. I really have not been much concerned with time lately of my runs, it’s been about distance and getting in miles. 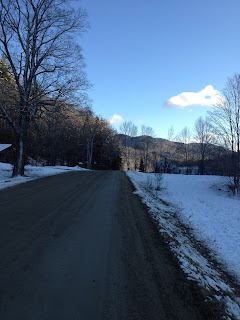 When I looked at my watch it seemed the miles were at times melting away. I was just going, with not real thought to it. I returned home in under two hours, nothing blazingly fast, up and down a mountain or two having gone over twelve miles. I got home, walked into the building and the shock on the kids faces at the distance I had just leisurely run was priceless.


They said you did what?, to me it felt like a nice run, not too long but nice. It was a chance to clear my head and moved onto the next day. The kids on the other hand, bless them acted as if I had climbed Everest. In the end it’s all about perspective, a couple months ago I would have had the same reaction as these teenagers did, today, I just shrugged and said it’s what I do.


I still am not the fastest or the fittest person in the world. I have never been the best at anything I have done. I am not winning every race I go into, actually I haven’t won a single one yet. I have one constant in my life, I try hard and I work hard. I was taught how to train at a young age, all I have to do now is push the go button and not overdo it along the way. I am just me, the new me, the me who can just go out and do. Just because I want to, I have worked my body into a place where I am just starting to get a glimpse of what it is capable of doing. I still as always have a long way to go, but have started and it seems now the road is wide open all I have to do is keep moving forward. The key is to not give up and just sit down or turn around then it gets tough, sometimes you just need to slow down rehydrate, glance back, then continue on down the road.