Where to start, all I can say is an epic afternoon in the woods. This afternoon’s training session for Spartan Beast and World’s Toughest Mudder turned into a memorable one. It all started off as a simple run with my pet rock. You see it was begging to go exploring when I got home from school and I couldn’t resist giving into him. I hoped on the trails like I have for the past few days, knowing I had a longer distance to go I just sort of let the rock lead the way.

I first ran past a tepee which was situated off the side of a field, it looked like it had been abandoned for a while. Next, I ran up the the top of a hill where moss covered remnants of an old stone wall still were standing. The trails were a muddy and the vegetation was thick. One of the times I threw the rock it landed into what I think was horse manure, it was old and dried out. That was not my favorite throw! A sugaring shack (maple syrup) was along my path as well at the edge of a field. The coolest part was my encounter with a deer, we stared into each others eyes then both went off our own directions. I started out the workout the same as last week picking up pet rock and throwing him repeatedly, that was mixed in with. I also mixed in just carrying it on one shoulder then the other. By the end of the workout I was just carrying the rock.

I tried what I thought were a few new paths behind the house and ended up on a whole other trail system. After about an hour and a half in the woods as light got flatter and flatter I realized I could be putting myself into a potentially dangerous situation. All I had with me was some water, house key and cell phone. I stopped and took a few minutes to assess the situation, quickly realizing my phone has GPS. Thank god for my iPhone. It is interesting to note that even lost, really lost, in the woods I felt calm and at ease. The woods have become a friend and comfort in my life. The worst case was I was prepared to retrace my steps back to the original trail. Luckily, I didn’t have to do that!

I figured out where the nearest road and headed in that direction. I got on an old cow path, I followed it for a few minutes, hearing cars in the distance. The path turned into a reedy swamp I saw a bunch of brand new homes about 100 ft away. As I trudged through the swampy reeds I realized I had one last challenge before I could get out of the woods. My last task turned into one of the most fun I had to scale up a rock retaining wall. As I walked down the road haggard looking, I passed a man walking pulling his son in a wagon he asked me, “Are you training for the Death Race?” I said, “Well yes in fact I am!”

Well this is where I have to be honest, I was a bit away from the house so I swallowed my pride and called my brother-in-law who came and picked me up along the side of the road. His exact words, “I looked like a homeless crazy person carrying a rock.” I can’t imagine what the cars thought that passed me as I walked down the street doing cleans and presses with the rock in hand. Today’s workout turned into more of a mental workout than anything else. The rock created a new element to the equation with the addition of getting lost you start to see glimpse of who you really are and how you handle uncomfortable situations, I laughed. I call this workout, a rock lovefest. We really bonded tonight! 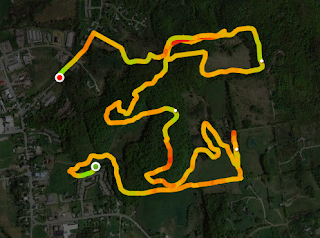 “Get Comfortable Being Uncomfortable”