Yesterday, was well in one word, Epic! It included a race, wedding and traveling through 4 states along the way. I began the day in Bethel, Maine at the Chapman Inn, after a huge breakfast, I offered to drop Butter and Buddha off at the AT trail head. After dropping them off and bidding them farewell and good luck on their journey, I get back in the car and started my own.

I arrived at the Sunday River, ME for the Tough Mountain Challenge registered and continued to drink copious amounts of water. The temps started to sore early in the day. The first heat went off at 10:00am. I started in the 10:20 heat, a handful of people at the event were sporting Tough Mudder shirts and headbands, talking about how much easier this race would be. My plan was to use this race as a last prep before the Spartan Beast. The Start happened and we were off. I went off with the lead pack of guys and stayed with them the whole time. One woman and I played back and forth for first place for a while. It was not until we got to the first downhill running that I separated myself from the rest of the women.

I ran with a pack of about 4 or 5 guys for the majority of the race. Actually at one point getting a little lost. It was through the first culvert that my pack forged ahead through the second culvert (which we weren’t suppose to do) due to some lack of markings, got out and realized we might have gone the wrong way. Then I saw a orange arrow painted on the ground, this must be the way I thought, we headed up and around on a mountain bike trail coming out to see the race sign about 100 yards down the mountain. Oops! So our group in essence made our race a few minutes longer with and additional 2-3 obstacles. Poor markings!

We were back on track and had been enough ahead not to loss too much time. Luckily, mush of the race was left to be run. In the end I ended first (correction results are up, got misinformation at the finish, actually ended up third) for women in my heat, got smoked in the overall. I am waiting for the official results to come out. I talked to a few friends post race and then it was time to get cleaned up. Look for the full race report to come with each obstacle detailed.

Now, is when the real challenge of the day happened. Get cleaned up and to a wedding a couple states away! Luckily, the nice folks who own the Inn let me go back and take a shower before heading to Saratoga Springs, NY.  I arrived back at the Chapman Inn around 11:55am. I had to be in Saratoga Springs, NY at 5:00pm for the wedding at the National Museum of Dance, a five hour drive away. This was going to be tight. I was showered, dressed, with make-up done in less than 20 minutes. Although, I still had a slight smell of french fry oil on my skin. They had lubricated the slide with cooking oil so the mud you went into at the end was a mix of oil and mud, pretty hard to get off.

I jumped in the car at 12:15pm and headed across a couple states and about 260 miles to get to the church on time. The outlook was not looking good, although my GPS said it would get me there by 5:00pm. Tall order! I made two stops along the way, bathroom/food and another for gas. The gallon of water I had been sporting around all day and drinking had gotten to me somewhere in NH. I was able to wait until I was back in VT for gas, cheapest along the way. The kicker of the whole trip was it took my right past my house on the way, it was so tempting to stop and relax there! 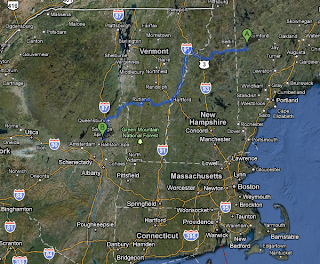 If you aren’t familiar with Saratoga Springs, NY it has a couple things going for it, the Saratoga Race Course and SPAC (concert venue). Both of which are near the Museum of Dance where the wedding was. I was on the phone trying to figure out my best plan of attack to get around town as I got closer and closer to the Saratoga. I held my breath and decided to go from the most direct route, which takes you through the center of town. Huge risk, but a couple minutes savings on time if I hit the right traffic pattern.

I pulled into the parking lot at the Museum at 5:15pm. It took five hours exactly with two stops. I rushed towards the entrance and saw the groom and most of the bridal party in one of the wings of the museum. My heart sank a little as I thought I had missed it! I made it to the front door and the bartender said, “You are just in time.” I said, “It hasn’t started” a little out of breathe from running in three inch heels. I then calmly walked out and took a seat in the back. I had made it in time!

A huge congrats to my friends Mike and Kaylin. The wedding was beautiful and their love for one another is unparalleled. A reading of Dr. Seuss’s, Oh The Places You’ll Go highlighted the ceremony. A fitting story for the two of them. A fantastic reception with great food! Truly a magical evening for the two.

At the end of the wedding I opted out of the downtown barhop as it had already been a crazy day. I settled into my parents air conditioned house for the night and couldn’t believe I had made all of it happen in one day. Looking back today, Sunday morning, a lot of the day seems like a blur. The race seems forever ago already, although a few cuts and bruises remind me it was yesterday. A wonderful day with a wonderful variety of friends.