Day 55… Last Prep Before the Beast

Posted on August 1, 2011 by Margaret Schlachter

Another week has gone by and thus another Sunday run. Sunday’s seem to have become my night hike/run day however, I mixed it up today. I met up with Dave and Jess, both running the Spartan Beast next weekend. They were interested in running the mountain to get a feel for it before the race. I took them on a tour which covered, Snowshed Peak, Bear Peak, Sky Peak, and of course the top of K1.

I had met Dave through the Death Race group and Jess came along with him. It was great after a ton of interaction to meet him. He is currently getting in shape in order to head off to bootcamp hopefully in the fall. He has set some pretty big goals going into this next year. He was hoping to do the 2012 Death Race but now it looks like he will be deployed or at least in training during that time so the Spartan Beast is his race. He is also running in the competitive 9:00am heat on Saturday. Jess is no slouch either, she is in training four days a week and is hoping to get into the Vermont State Police Academy. They were great running partners and I really enjoyed their company as I was a little tired from yesterday’s adventure. We had a great hike/run and it was fantastic getting to know the two, not to mention covered a fair amount of terrain. 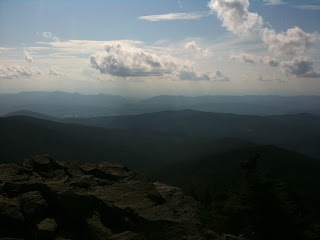 TRAIL RUN
Killington, VT
Distance: ~11 Miles
Time: 2:37
Pace: 14:15
It’s amazing that the race is less than a week away. I feel like when I signed up for it during the ski season the thought of the race was eons away. I mean the mountain was still open and I was deep in ski season focusing on my athletes and their successes. Now it’s almost here! I can honestly say as each day goes by I am more and more excited for all my obstacle racing friends, and even at this point many feel like family even though many of our interactions have been limited to virtual chatting. The obstacle racing community is pretty small and we are a tight knit group, that some might call crazy. I like to think of us as all unique individuals. Each one of us is a pioneer in this blossoming sport. For it is truly becoming a sport, for many who travel the country to compete. I have friends coming in from Nebraska, Virginia, North Carolina, New York City and beyond all to compete this coming weekend in my backyard. How cool is that! 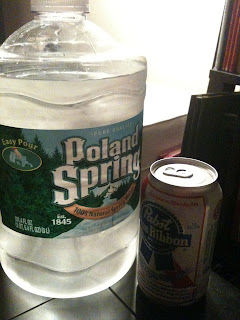 Anyways, it was great going out with Dave and Jess and I wish them the best in the race. For now I need to go pack, for it’s back to school tomorrow for the next two weeks. I will be hitting the books and squeezing workouts in between chapters and papers. The joys of summer grad school! Lastly, hydration has been key with the recent heat and such. I thought I would throw in a picture of my “new” water bottle. Can’t wait to see what people say when I show up with it in class. I feel like a meathead body builder most of the time when I walk around with it but I need the hydration! The PBR well that’s another sort of hydration, thanks Jason for leaving some behind!

Overall this weekend my feet carried me 27 miles and I only walked away with two very small blisters. Not too bad! Still loving the new shoes. Inov8’s you have my heart. Next time I am on Killington it will be for the Spartan Beast, for now its tapering, before the race and hanging with my niece!