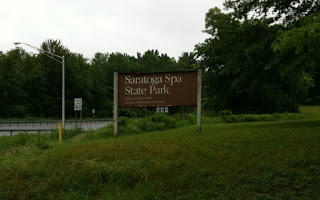 After a couple of hours in the car this morning driving from Boston, MA to my parents in Saratoga Springs, NY. I was excited to get out of the car and onto the trails and get training for World’s Toughest Mudder and Spartan Beast Killington. Taking some well intentioned advice from my mother I headed over to the Spa State Park, to check out their trails. Well, a few minutes into the run I realized it would be an interesting one. Over and over again I kept trying to figure out where the trail really was. Some were marked, some were not, and some were undoubtably trails “blazed” throughout the year by concert goers on their way to SPAC. The run turned rather schizophrenic as I darted and dodged in and out of the trails. Several times running around in circles and passing the same people over and over again. I added some extra weight today carrying about 10lb’s in my backpack during the run. I like to do this as when I get to races I am able to go faster without the added weight. Did I mention it was raining the whole time? Actually, the rain was great as it kept me cool over the 8 mile run. In the end, the run turned into a mix of trail and road running. 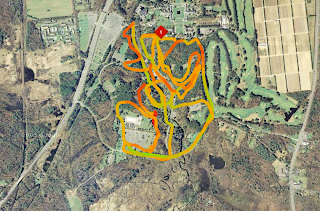