Posted on August 15, 2011 by Margaret Schlachter 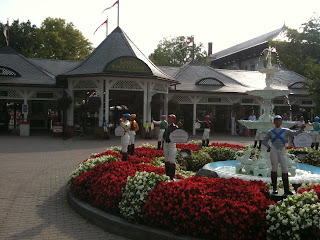 It’s day 69! I could go so many places with it but for now will stick to what I did today instead of all the jokes and such. After the Warrior Dash yesterday I came back to my parents in Saratoga Springs, NY. I woke up this morning and decided to do a long run. It was needed. I have been off the training track to get ready for my ultra in the last two weeks with the Spartan Beast and then recovering from the Beast and Warrior Dash.

Since I raced yesterday I decided not to make the run too long and settled in on a half marathon distance. I headed out of my parents house and took a leisurely stroll through Skidmore College, downtown Saratoga, even making my way over to the Saratoga Race Course. It was funny as I was working out running around people were there at the race course in the morning watching the horses breeze (workout). It was definitely different being at the track in workout clothes, normally I am dressed a lot nicer when there. I actually ran into friends chatted for a few minutes and continued the run. 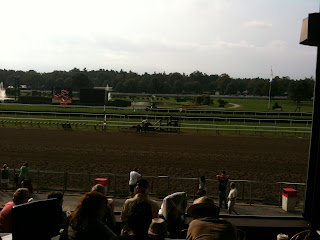 I felt pretty good until I hit in between mile 8-9 at that point I started to get cranky. I stopped got some gatorade and a few minutes later I was starting to come out of it. The gels were not cutting it at that moment. As much as I hate running in an urban environment it does have it’s advantages. Not something I want to make a habit of in the future! I used my new Inov-8 f-lite 195’s look for a full review of them tomorrow. Tonight I have to write a paper about myself to finish up my grad school class.