Posted on August 22, 2011 by Margaret Schlachter

My alarm went off 4:00am this morning. I woke up extremely nervous about what was about to transpire today. On Thursday, Jason (my training partner) told me I would join he and Joe Desena (Founder of Spartan Race) on a run on Sunday. I had expressed my fear about running my upcoming 50K as I have not even run a marathon before. I was told the best way to get over my fear is to do it, so today I would do just that! 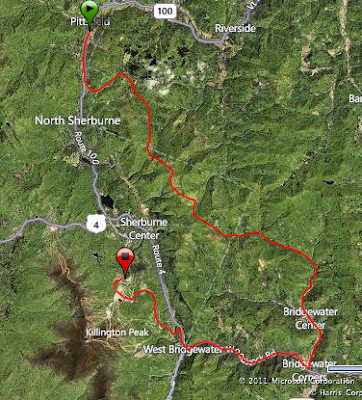 As I got out of bed I realized today it was going to happen, I was going to not only run my first marathon but my first ultra. We made it to Joe’s house in Pittsfield, VT around 4:45am, did some last minute prep and then headed out prior to sunrise, headlamps on. As we left Joe’s house I was nervous, like REALLY nervous about going this far. I had to suppress my fears and just start moving. The guys talked casually and I was silently plodding along in the beginning. We headed out on Route 100 then quickly turned up a dirt road and headed up the first mountain.

As we crested the first mountain the sunrise was simply amazing. No pictures as we were on the move today. It was funny as some people conduct business meetings on the golf course I learned Joe enjoys talking business while on LONG runs. We ran through a mix of dirt roads, rugged trails, and paved roads. It was truly a mix. The guys were great helping me push through some of the tougher moments along the way, without having to say anything. Prior to this run my longest run had been 18 miles. Along the way we took a wrong turn somewhere and ended up popping out on Route 4 right next to Long Trail Brewery in Bridgewater. After a quick stop at Bridgewater Corners Country Store for some Gatorade and more water we started to make our way along Route 4 back to Killington.

It was around mile 25 that it got tough for me. Silently, I pulled myself over this first huge wall that many times before I have succumb to and had broken me in the past. Working through this wall was a huge breakthrough for me as in the past it has been a devil I could not conquer. As my breathing starting to tense up and I felt the onset of the panic attack knowing tears would be next, I looked down at my watch to check my pulse, it was around 160 bpm. I was not dying, it was time to harden the eff up and get through this one, not let fear takeover. I kept going wanting to stop for about a mile, call for a ride, anything to stop this madness, feelings of EPIC FAIL flowed through my veins with each step. I watched the guys get ahead of me. Slowly, I made it out of this dark place and all was light again just before mile 27. As quickly as this onset happened it was gone and I was able to catch up and joke around with the guys again. I now know I can get through these moments the next time it happens because I know it will happen again. 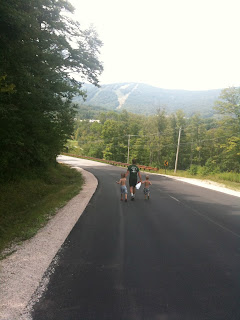 As we went into the last 5 miles up East Mountain Rd at the base of the Skyship Gondola in Killington we began our last accent back to my house. Joe’s kids joined up with us for this last uphill trek. They are tough little boys and it was great to have them along the way. We dropped Joe off with the boys at the Killington Grand and Jason and I continued on to my house.

Three of four towns later, we ended up back at my house and 33.44 miles today later. I ran not only my first ultra distance but also my first marathon in the process. The fist pump I got from Joe after I finished the marathon was priceless. I was so glad Jason saw in me that I could do this distance and accomplish what I didn’t believe or know I could. It reinforced the importance of having a training partner to help you push beyond.