Day 95… From the Woods to the Concrete Jungle

Posted on September 10, 2011 by Margaret Schlachter

It must be something with traveling and my Spartan family and I, as it seems every time we all try to get together it turns into an adventure. My travel to NYC started on Thursday and I finally put my pack down at MScan’s apartment at 1:00am in the morning Saturday. Below is a recount of my travel out of the woods into the foreign territory of the concrete jungle.

As most are aware we have had small storm called Irene come through and take out the main routes in and out of Killington about two weeks ago. The people of Vermont are ingenious to say the least. Instead of settling for being stuck we come up with alternative routes. In order for me to get to Rutland to catch my Friday morning train I had to use what I have lovingly called the “gypsy trail.” To get to the Gypsy Trail I had to stop park my car about a mile and a half from the trail. Local residents run shuttles all day long. I locked up my car put on my pack, loaded down with all the essentials for the GORUCK. Mick, one our my student’s parents gave me a ride to the trail. After about a half mile or so I popped up on the other side. Here I ran into a friend who was heading home from work, we randomly ran into each other and I was grateful for the ride to another friends house where I had a car to borrow for the afternoon.


Once I picked up the loaner car, I set off to get my bricks. I have already blogged about this experience but I will reiterate the people of Home Depot see me coming and know my requests for help will always lead to the strangest combination of tools. Thursday night I settled in at Ryan’s house and made final preps for the second part of the trek to NYC. 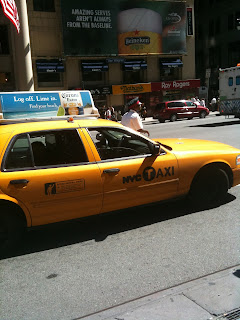 Luckily the morning was uneventful, trains were on-time and mostly that whole part of the trip was uneventful. It was not until I reached NY that the real fun started. First off at this point by backpack I was carrying around, yes I carried a hiking pack through the streets of NY. Imagine the European tourist and that’s what I looked like miss a dangling camera. My pack at this point probably weighted about 50-60lbs. Good training for the GORUCK Challenge. Knowing trying to maneuver this around subway system of NY would be difficult at best I figured the best option would be to wait for a cab with all the other tourists. Normally I hate this and like to blend in when I reach the city. Not this time!

After the longest wait ever for a cab in NY, It has taken less time to get on in the middle of a rain storm, I finally got into the cab. I told the cab driver three times where I wanted to go, which was York between 72nd and 73rd to visit with my Nilani for the afternoon. As the cab took off I answered some emails and caught up with the world. The driver pulled over and I looked around to realize he had taken me to Broadway between 72nd and 73rd. If you know NY you know this is the wrong side of town, EPIC FAIL.

I told him again I wanted to go to York. So we set off across town. With the heightened security traffic was a nightmare, as we entered over 40 minutes in this cab my bladder was at the point of exploding. I had spent the last six hours hydrating on the train. I could hold it no longer and the cab pulled over for me to run into the nearest shop to beg to use a bathroom. The first shop I went to didn’t have a bathroom, luckily a salon was right next door and they were kind enough to let me use their bathroom as my face showed my true distress. I walked out of that bathroom like a new person!


After a nice afternoon at Nilani’s apartment I started the next part of the trip, get to Crossfit South Brooklyn to meet up with MScan and meet her trainer Shane. Another crazy cab ride later, my 60lb pack and I showed up in Brooklyn. The journey did not end there.

After MScan finished her workout we headed from Brooklyn to the GORUCK space on Broadway for the fundraiser and meet-up. This time we took the subway. I don’t think people of NY know what to think of a female dressed in a skirt wondering around with a huge hiking pack. We arrived at the space and with my pack in tow, put up with Katy McCabe and meet many other members of our class. After the fundraiser was over we headed to another part of town to an Irish Pub which MScan suggested to get some food with a few of the guys from out class. Now want to cause a scene, enter a pub in New York with a 60lb pack on and see what looks you get.


After dinner and some drinks we finally headed back up town to the Upper East Side to her apartment and I finally reached my destination. A simple trip from Vermont to NY had spanned the three days, and covered a lot of extra distance along the way. But as is everything in my life these days, this was an adventure.