How it all started…

Posted on June 5, 2011 by Margaret Schlachter

It all started on Facebook in the late winter early spring 2010. Yes, Facebook, a simple Like from a friend of a new race called Spartan Race to be held in Burlington, VT. Being the inquisitive person I am, I followed this page to see where it would take me. All at once the world of obstacle racing opened up in front of me, with a bit of hesitation I signed up for my first race thinking 2 miles (as advertised) I can do that! I have always been a competitive person, played sports at an elite level in high school and was a two sport D3 varsity athlete in college. But running was never my specialty. 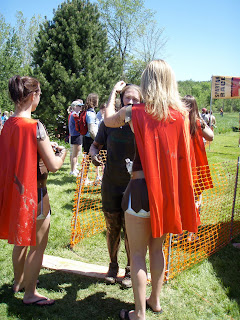 On the day of the race, I arrived to find out the race had been changed to two laps around the 2 mile course not one. Then the race started, not knowing what I was getting into I was ill-prepared for what lay ahead, dressed in a cotton shirt, cotton capri’s, and worst cotton underwear. As the race started about 500 participants and myself ran through a fire hose, jumped over fire, fought a gladiator, swam across a freezing pond, up and over barrier walls 4 – 10 feet, through a spear, went up a greased inclined wall,  ran through knee deep mud, crawled under barbed wire, crawled through a muddy tarp covered pit, and finally up and over a cargo net. I have never had so much fun in my life! This was racing, not our average road run or walk in the woods. To top it off I did better than expected and made it into the finals that day finishing top 10 overall for women.

I immediately went home that night and signed up for another Spartan Race Boston to be held in Amesbury, MA in August. Through Facebook, I found out about other races Warrior Dash – New York at Windham Mountain, Rugged Maniac in Southwick, MA, and the Shawnee Peak Challenge at Shawnee Mountain, ME. While racing at the Spartan Race Boston a plane flew by with a banner behind it proclaiming, “Think this is hard try the Tough Mudder.” I went home and did some research online, my first reaction was, “No Way!”, I knew I could do these 5K races but a 10 mile race. I had never run more than 5 miles at one time, let alone 10 miles with obstacles up and down a ski resort. As the summer wore on I completed the Warrior Dash, Rugged Maniac, and Shawnee Peak Challenge the lingering thought of the Tough Mudder would not leave my mind.

After completing the Shawnee Peak Challenge in late October 2010, I pulled the trigger and signed up for the Tough Mudder – New England to be held on Mt. Snow Ski Resort in Vermont in early May 2011. I remember as I pushed the initial button to sign up I had a, “hope I can do this and not make a fool of myself.” After I got the confirmation email it was on. Most of that winter I was too busy with work to think about the race, it as not until the end of the winter, late March/Early April, that I thought about it again. I did about a 30 day crash training program, luckily my work keeps me in shape during the winter. I hit the trails and went through the painful process of getting into running shape. As race day approached my training was fueled by the fear, what would I tell people if I didn’t finish. I trained harder and harder as race day approached.

Race Day, standing at the starting line this was it. 10 miles, 13,450 vertical feet, 7,000 vertical feet of incline, and about 28 obstacles ahead of me. The gun went off at 9:00am Sunday morning and we were off! I felt myself settle into what I thought was the middle of the pack up the initial incline, hit the first aid station and kept moving. It was not until half way into the course that a course worker said, “You are the second female to come through, keep it up!” I thought no way, they are messing with me. The next obstacle I heard the same thing. Ok, I thought maybe I am actually towards the front. It was not until the 12 foot walls that I caught up with the other women. Indeed it was the three of us, with only about 20 guys in front of us in a wave of about 500 people. This was the point in the race where I realized not only was I doing it, but crushing it! A friend had done the race on Saturday and told me it took him just over 2 hours to complete. I had a gauge for where I should end up. All I remember on the course was being surrounded by a lot of quiet and had to keep telling myself just keep going. Self affirmations kicked in around mile 8 to get over the last two miles. In the end, I finished as the third woman in our heat, with a finish time of 2:36.

When I got home I submitted my time to Tough Mudder to see how I ended up against the rest of the competition. The top 5% would make the World’s Toughest Mudder. Two weeks later I got THE EMAIL:

Here I am today, signed up for World’s Toughest Mudder. Training officially starting June 5, 2011. This blog is to help aid my training by keeping a log of workouts and other races leading up to this 24 hour race. My summer race schedule:

Maybe another race in October…

I don’t know if anyone is going to be interested in reading this but, oh well ultimately it’s for me! World’s Toughest Mudder training, here we go….