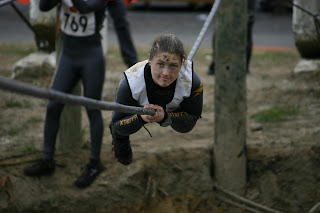 There we were in the Wetsuit tent, the three amigos together. Our team had unknowingly assembled for what would proved to be a long rest of the day and night. We headed off to the water obstacles for the first of many times over the next day. As we headed towards the water we walked past the medical tent seeing many many hypothermic people. In fact found out afterwards 500 people dropped during or shortly after that first lap. 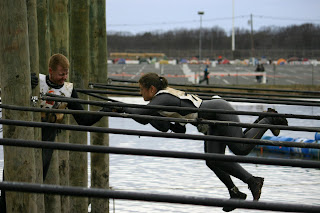 The first water obstacle was called the dong dangler or in Spartan world the traverse. This was it the obstacle that we all know I had struggled on three times in Texas. A hoist onto the plastic coated rope and I was off pulling myself along. This had been my kryptonite but today it wasn’t a big deal. Several of the Spartan Race Storm Chasers had come to watch and knew what this obstacle meant to me. I pulled myself along slowly. As I reached the end the rope coated in mud was hard to pull myself up. It was then Todd who was already on the other side reached his hand out and pulled me along. Truly my hero of the race. 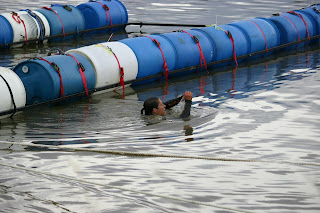 Quickly we were in the water and duck diving under floating barrels. This was COLD. The water literally took my breath away. As I pulled myself up the platform and back onto land, I caught my breath and we headed around the lake. This time a swim across the murky water and over to the other side. I watched people struggle with the rope ladder and one fall on his head, wanting not to get fallen on or fall myself Todd said we should take the penalty. I found out later Joe Decker fell of and onto someone below, who happened to be another friend Kristen. Luckily all are ok! We took our penalty and headed on to the walk the plank. 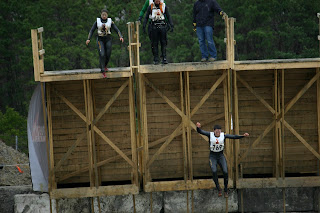 Walk the plank is definitely the easiest. You just walk off a platform. Heights don’t bother me, I had already been in the water. It was cold, yes very cold, I swam to the surface. I pulled/swam myself back across the lake, now fully wet to the core. The log carry was next, basically I pushed a log around in the water, the guys could walk, I had to swim. Really just another way to get wet.

We walked back past the wetsuit tent, kept them on and finished out the lap. A quick medical check which consisted of saying our name and our number to the people. As we checked in a sea of cots were full of people to whom the water temps and the weather had taken out. 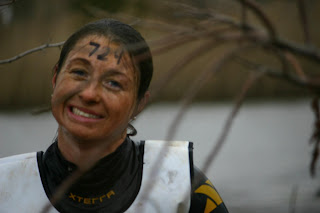 We finished our lap returned to the pit area. I stripped all my clothing, changed into the next set of clothing, ate some MRE’s and a bunch of other food. The three of us joked around. We watched more and more tents come down and people exit. I came up with a new plan for clothing. I put on long underwear, my CW-X bottoms over that on the bottom. On my top I had on an Under Armor Cold Gear Compression Top and a CW-X Insulator top then a neoprene hooded vest. Then over all of this I placed my wetsuit. I felt like Ralphie’s brother from a Christmas Story. I was not the only one. You have to find a sense of humor in it all. 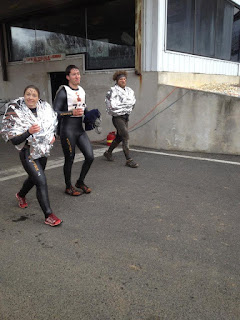 Spirits were high and we set off for our second lap. Instead of going through it all again because this lap is really a blur, we talked, laughed, joked and embraced the suck together. We saw Ray Upshaw along the way in a med tent and he wished us luck on. As we completed the second lap it was getting dark. Yitzy grabbed a whole thing of cookies from the last aid station and we returned to the pit less and less tents were still standing. We were told less than 100 people were still on course.


We took another break ate more, changed clothing. I spoke with my training partner in Jason and was in pretty high spirits. The change of clothing was a huge advantage. At this point the Southwestern Chicken Rice and Beans MRE tasted pretty and any fine dining meal. The hot food I scarfed down as if it was my last meal. I took in a bunch of liquids, downed a Mocean Mate and Gorilla Bar. Basically all the food I had I ate. We took a little bit longer break and made sure we were ready to go and set off on our third lap sometime around 8:00pm. During the third lap we met up with a former classmate, Carson. He was a lap ahead of us but he said this one would be his last. He was done. 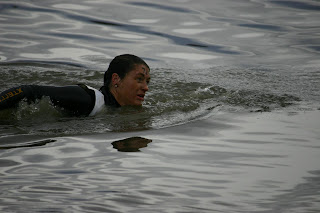 As we approached the water for the third time, the cold weather had become more and more apparent. The obstacles were starting to ice over. The ramp up from the obstacle was iced over, the temps had dropped well below freezing into the 20’s. The swims felt different this time, and I was really cold exiting them. I was driven by the fact we had pizza in our tent for me to eat. It was at this point I started to feel cold and really cold. When we went through the log carry, I could feel it. My headlamp strap was stiff and frozen. At this point it was nearing midnight when we returned from the third lap. We finished out the lap, checked in at the medical tent and Todd was talking to and helping one of the women still in the race. He also stopped to talk to Joel and Amelia, I couldn’t stop I needed to be dry now! I went to the tent as I needed to get out of the wet clothing ASAP.  This is when the game changed.